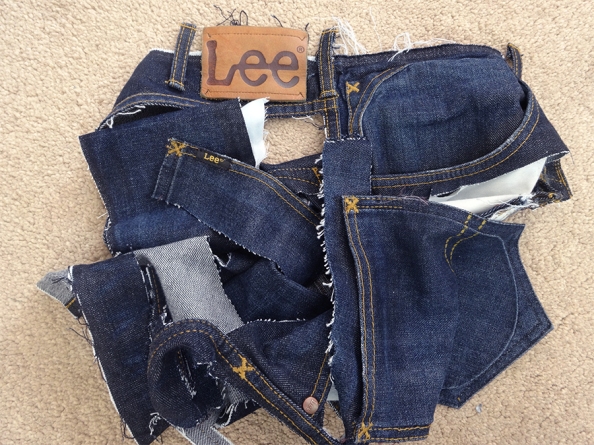 Sorry to disappoint, it’s none of the above, nothing that exciting happens around here.

What really happened was I cut them up to make my daughter some jeans. Upcycling, to make a positive impact on the environment, reduce my carbon footprint and all that, and because you just can’t get the worn in, beaten up, slightly faded, uneven colouring denim in the fabric shops, so my husband’s jeans were perfect in a non perfect way. But that reason comes secondary – of course.

I made these dungarees before, during and after I made the Jagger Jeans. I had the idea in my head that jeans were going to be ‘my thing’. Everything I made was going to be denim. Indigo was going to be my new favourite colour. Yeah, ok, that didn’t happen, but I am still in love with denim and making jeans is a thing that I would like to do a lot more of.

It took me 5 months to complete the dungarees you see before you, there was more stopping and starting than a defective train on the London Underground. All sorts of things went wrong. And I spent far too long trying to rectify all those things that went wrong.

So why did they take so long?

It was my intention to make some Small Fry Skinny Jeans for my then 7 year old. But clearly you can see this little gorgeous girl (with attitude) is not a 7 year old and she is not wearing skinny jeans.

Unfortunately, the Small Fry Skinny Jeans did not fit my 7 year old. ‘Skinny’ being the operative word.

It could have been all of the above, I don’t actually know what went wrong, but I do know that I needed a solution, because the jeans were looking too good to be left and forgotten in a pile of unfinished projects.

Before I fully assembled the jeans I could see that they were looking too slim, when I tried them on my 7 year old they were far too narrow around the hips – FAIL!!!

I was not satisfied with the obvious panel down the side solution because I was going for more of a classic look. The rise would be too long if I wanted them to now fit my 3 year old. So after 2 months of trying to come up with a satisfactory solution, I decided upon a pair of dungarees. Where the long rise would enhance the design and I could still go for the classic look that I was desperate to maintain.

The only problem being I had limited fabric left to play with so I had to be clever with the design. I used the original pocket for the front pocket but had to make it smaller and change the shape so it didn’t look out of proportion. I added a triangle flap for a bit of quirkiness and lined the whole top panel with a solid mustard yellow fabric, a fancy print would have been out of the question for the classic look I was going for. 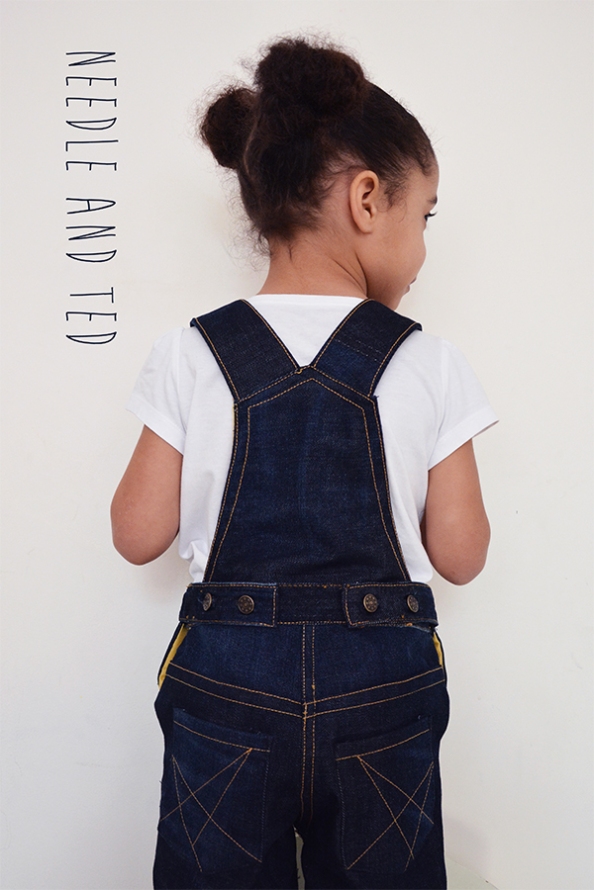 I also used the original waistband but removed the belt loops and used the extra length to wrap around and fasten at the back with hammer on buttons.

I spent over a week trying to shorten a metal zip, that I will never ever, not ever attempt again. (Just look at that dog-eared zip edge, how on earth was a zip stop going to clamp back on that?). In the end I didn’t need a zip for the dungarees and had to remove it. Don’t you just hate it when that happens?

I’m not entirely satisfied with how I finished off the side opening because it gapes too much and reveals the mustard fabric, but at least it doesn’t show underwear.

All in all I think the dungarees look pretty cool but for 2 months Scout point blank refused to wear them. I persevered and she eventually came round to loving nearly as much as I do.

I find it immensely satisfying sewing jeans. It’s hard to explain how it feels to make your first pair. The hard wearing quality of denim fabric, how it gets better with age. The top stitching thread that gives it lift and depending on the colour can give it a modern, classic or vintage feel. The accessories that are perfect for denim; brass dungaree clips, hammer on buttons (hammering is obligatory), rivets, metal zips. You feel a great sense of achievement when you have finished and you are filled with an urge to make more and more.

I also love that even people who know you sew don’t ever expect that you have/could/would make a pair of jeans.

I have more denim projects in the pipeline, and if you follow me on Instagram you will already know what’s coming next.

Have you ever made a pair of jeans? Did you get the same sense of satisfaction as I got? 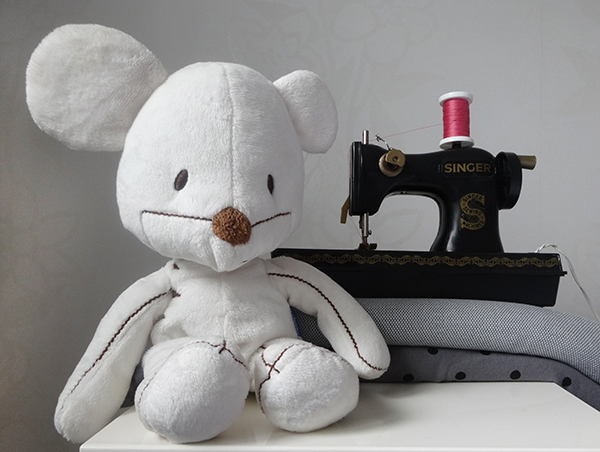 I don't buy clothes any more, I make them instead. Don't be thinking I'm saving money, my fabric stash can fill an entire double wardrobe.

I mostly make for my 2 girls, but you won't find them wearing anything nauseatingly cute or excessively sweet. We have an aversion to twee. Modern, funky and quirky is our style.

Sewing patterns for the stylish and adventurous. Life is an adventure. Dress accordingly.

I'll be there, will you? 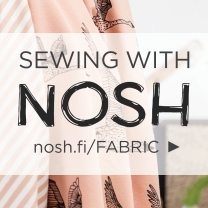 My favourite fabric. try it. You will love it.